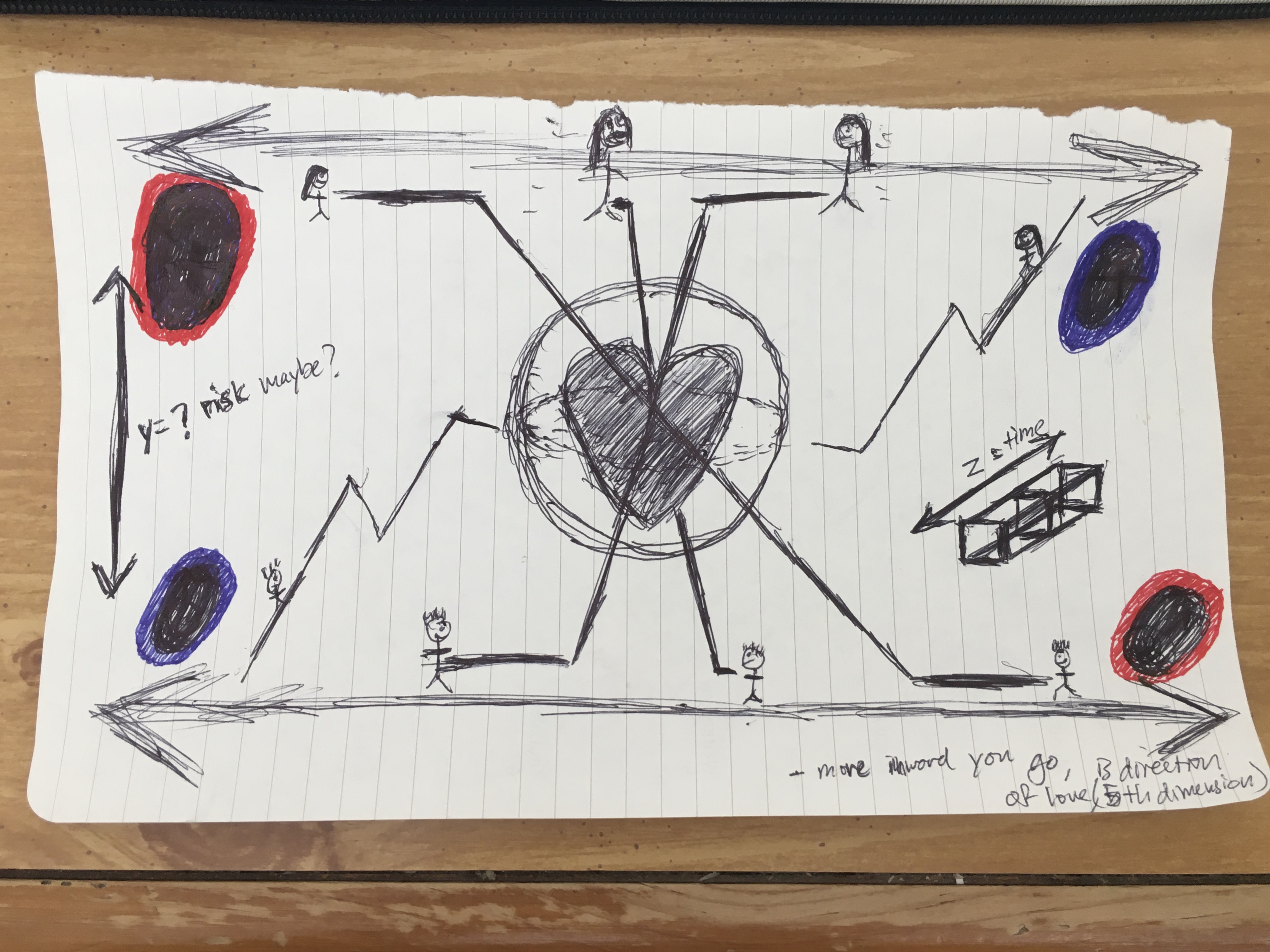 One day I was sitting at my desk, just daydreaming. I have a thought about love and men and women meeting in the middle to form a relationship and fall in love. I picture this vision in my head and a diagram forms in my thoughts. That diagram is what you see at the top of this blog.

Men and Women both traverse on the spectrum of being "real" and "fake" (I'm implying today's cultural definitions of the words). Some people start out as fake and become real and some people start out as real and become fake. You can even go from fake to real and back to fake. The point is that men and women move on this spectrum. In the diagram, men are on the bottom line and women are on the top line. I decided to use the red pill to represent real and the blue pill to represent fake (because the matrix is awesome). Now, before I continue further, I understand this is a very binary view of love. I know love exists in many forms today, but just for simplicity, I used man and woman in this diagram. Now, as a man or woman is moving along this spectrum, their eventual partner is also moving in the exact opposite direction at the same speed. So as one partner is becoming more real, on the opposite side, their eventual partner is also becoming more real. Eventually, they meet in the middle (the heart) and fall in love. This also works for two partners who are both becoming more fake. This process is represented by the lines connecting the two spectrums that cross through the heart.

Now I know this sounds like we have no free will and everything is pre-determined. However, I believe that we still have free will in terms of which direction we choose to move on the "real" to "fake" spectrum. However, the power of love eventually connects us with our partner that was moving in the same path(s). When I drew this picture, I wondered if there was a y axis that humans can move on, but I couldn't put my finger on what it would be. While I was writing this blog and talking about free-will and pre-determinism, it came to my thought that the y-axis could be existentialism and essentialism. The further you move away from love (the heart) the more you choose existentialism, and the more you move toward love, the more you choose essentialism. Existentialism is great but I believe if you follow it too much, you could be denying yourself love, commitment, and purpose (the essence of who you are). Following existentialism too much could just lead to an existence without essence. People also move along the spectrum of existentialism and essentialism; it's part of our journey in life.

The z-axis is time. As time, a constant, moves forward, this process of love occurs, propelling life. Lastly, the craziest part of my theory, Love is the dimension of the inward direction. The more inward you go in the diagram, eventually, it will lead you to the dimension of love. This is why I drew the heart in the middle of a sphere. From any direction, the more you move towards love (the heart) the more you experience the 5th dimension (love). This is kind of like how ant man became so small he was able to go back in time through the quantum realm. Paul Rudd went so inward(the direction of love), forcing his size towards the middle (shrinking); it allowed him to control the 4th dimension and travel through time. He did this to rejoice with his family and regain love; love is what guided him. "Lol I don't know about that last Paul Rudd part, but it sounded cool when I thought about it in my head, so I thought I had to share it."

Lastly, I know this doesn't comply with our conventional understanding of dimensions. It's not supposed to. I just used our conventions as a way to diagram love.

Love is what guides us human beings. if we follow love, it will give us purpose in life and define our essence. Do what we love and love what we do.

P.S. These are just my thoughts. I thought better to share them than to not.

Love is the 5th dimension.

Everyday thoughts and observations that can spiral into deep meanings.