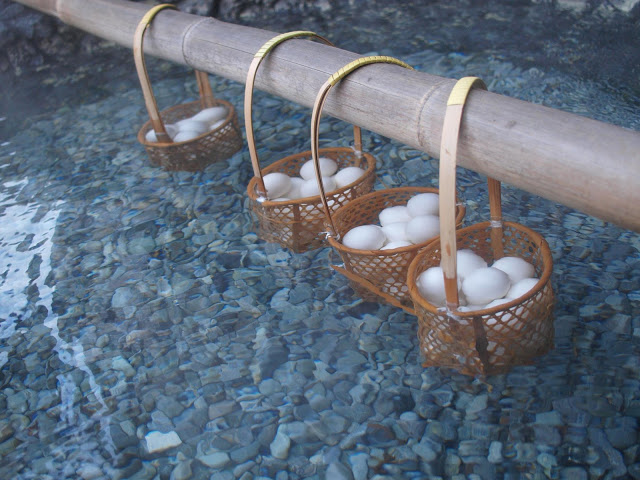 First off, the egg. The egg is one of the quintessential ingredients of the culinary world. A simple ingredient that's comprised of only two colors: white and yellow. We eat it everyday for breakfast, and culinary masters use it as a finishing touch on their greatest creations. Just from the technique of boiling an egg, you can produce so many different outcomes. The Japanese have mastered the art of the onsen egg. This egg was originated from Japanese people putting eggs in onsens(hot springs). After leaving the egg in an onsen bath for roughly 20 minutes, the egg attains a smooth, almost pudding-like texture(similar to a soft tofu). The texture of the egg has a smooth mouth feel that coats the entire mouth with the pure richness of the protein. An onsen egg can be consumed with a light soy sauce daishi or on top of a bowl of steaming white rice. Many Japanese restaurants will serve udon and rice bowls with an onsen egg gently placed on top the dish; the onsen egg melds the flavors of the dish, while enhancing the textural experience within each mouthful of food. In the western culinary world, a similar type of egg would be the soft boiled egg. A soft boiled egg is cooked the same way as a hard-boiled egg but for a less amount of time. The soft-boiled egg leaves a partially cooked egg white and a smooth runny yolk. However; this type of egg is still inherently different from the onsen egg. In the onsen egg, the egg white and yolk have the same gentle texture. This composition of egg can only be achieved from the temperature of the hot spring. It is different from a boiled egg because the temperature of boiling water is much more harsh on the egg, causing the white to cook faster than the yolk. The onsen temperature can also be achieved at home. It requires water that just reached its boiling point; this water is then taken off the stove and combined with a small amount of cold water. The temperature of this water will be similar to an onsen. You then leave the eggs in the water for roughly 17 minutes. Then Wah-Lah! You have the onsen egg. The Japanese onsen egg is a true example of cultures and environments creating the distinct variants of food around the world. Hot springs are common leisurely activity within the Japanese culture, thus the onsen egg was to able to be invented. Due to different environments and cultures, people are able to create varying techniques of cooking, using the ingredients of their environment.

A cool kid on the block who likes food.